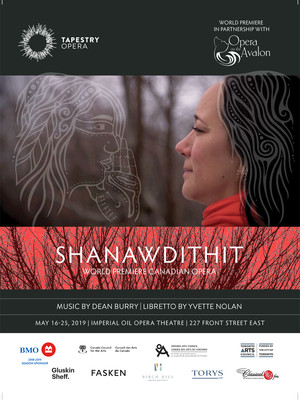 A Co-production between Tapestry Opera and Opera on the Avalon, Shanawdithit is a landmark Indigenous-led and cast world premiere opera. The story and libretto is written and curated by celebrated Algonquin playwright Yvette Nolan, with a score composed by Newfoundlander Dean Burry.

Centred on the story of Shanawdithit (1801-1829), the opera restores a voice to a story seldom told and told incorrectly. This collaboratively created opera combines soaring orchestration, evocative storytelling, and spectacular, large-scale works of art.

In 1829, Shanawdithit was taken to St. John's, Newfoundland by William Cormack, where she created a series of ten drawings that spoke of the life of her people, their encounters with the European settlers, and loneliness of survival.

Shanawdithit's detailed drawings are the foundation of the opera.

80 minutes with no intermission

The story and libretto are written and curated by celebrated Algonquin playwright Yvette Nolan. The score is composed by Newfoundlander Dean Burry.

Seen Shanawdithit? Loved it? Hated it?

Sound good to you? Share this page on social media and let your friends know about Shanawdithit at Imperial Oil Opera Theatre.