Sorry! You missed JFL42 Festival - How Did This Get Made Podcast at Sony Centre for the Performing Arts 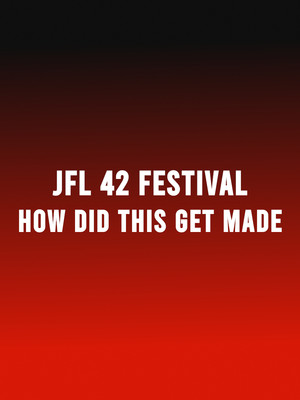 JFL42 Festival - How Did This Get Made Podcast

seriously addressing the silly by riffing rather than ripping on these films, they're able to find the inherent fun of what they've just watched

Why See JFL42 Festival - How Did This Get Made Podcast?

Live Episode Recording of "How Did This Get Made" at JFL42!

How Did This Get Made has won awards for its hilarious premise and priceless delivery - three hosts and their guests subject themselves to watching a terrible movie, then attempt to deconstruct and review what they've just seen. Their live episodes have seen sold-out shows nationwide and are a unique experience not to be missed!

Sound good to you? Share this page on social media and let your friends know about JFL42 Festival - How Did This Get Made Podcast at Sony Centre for the Performing Arts.