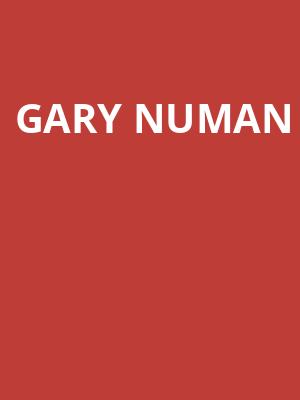 The grandfather of electronica is far from slowing down!

The electronic New Wave pioneer returns to the stage

A pioneer in commercial electronic music, English-born New Wave star Numan very much still enjoys a loyal following in the new millennium. Formerly the front man and sole songwriter and producer for punk rock and early New Wave band Tubeway Army, he opted to drop the name of the band and perform under his stage name, however he maintained the rest of the group as his backing band. Famous for his hits "Are 'Friends' Electric?" and "Cars", Numan continues to record and perform live across the USA.

His seminal album The Pleasure Principle was released in 1979, which set the bar for his enviable electronic hook skills, and was a number one hit in the British music charts that year; he continues to perform music from that album to popular request.

About 18 of us Numanoids gathered at 4:30pm at the Fonda for the pre-show... more

Just an incredible night. Thank you Gary, it had to be so tough to... more

Sound good to you? Share this page on social media and let your friends know about Gary Numan at Phoenix Concert Theatre.