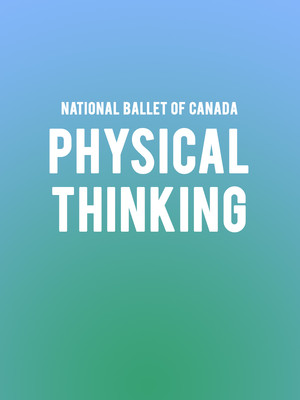 Brilliant, inscrutable and wildly entertaining by turns, William Forsythe is at once a ballet purist and the high priest of post-structural contemporary dance.

Why See The National Ballet of Canada: Physical Thinking?

Physical Thinking is a programme of three works that showcase Forsthye's versatility, style and range. It begins with The Vertiginous Thrill of Exactitude, a fast, physically demanding piece that Forsythe originally created for his Ballet Frankfurt company more than 20 years ago and was praised by The Guardian as showing "dancing of heartstopping precision".

Second up, is Approximate Sonata 2016, a more reflective work with mesmerising intricacies, set to a quiet piano score by Thom Willems.

The programme concludes with Forsthye's The Second Detail, an altogether exhilarating piece that is as playful and wily as it is powerful and vigorous, demonstrating the brilliance of human movement.

Seen The National Ballet of Canada: Physical Thinking? Loved it? Hated it?

Sound good to you? Share this page on social media and let your friends know about The National Ballet of Canada: Physical Thinking at Four Seasons Centre.