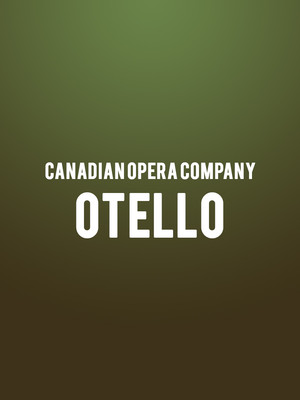 In this flawless production we watch the disintegration of the hero with fascinated horror, as the seeds of madness are sown, and he becomes locked into his cycle of doom.

The prestigious Canadian Opera Company continues their rousing 2018/19 programming with the soul-stirring music and passionate drama of Verdi's Shakespeare-inspired masterpiece Otello. The opera's original ancient setting is given a post-modernist revamp by celebrated American theatre and film director David Aldean's critically acclaimed production, which drew much critical acclaim upon its English National Opera world premiere in 2014.

In Aldean's rousing retelling, central antagonist Iago is an assimilate Muslim who has converted to Christianity, but is filled with class-ridden resentment and fury. He is trusted advisor to Otello, a self-made former slave now risen to the rank of general, a fortuitous rise that fills the jealous Iago with spite. Abusing his position with the general, Iago sets out on a quest to destroy him and everything he holds dear, including his naive and trusting young wife Desdemona.

Sound good to you? Share this page on social media and let your friends know about Canadian Opera Company - Otello at Four Seasons Centre.