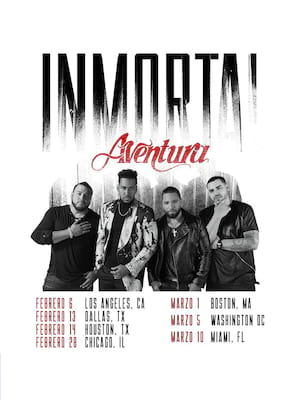 The bachata stars are back!

Anthony, Henry, Lenny and Max are back on the road in the US for the first time in ten years with their Inmortal tour! With their first single in seven years, "Inmortal" (for which the tour is named after) breaking the internet could this be a sign for new music on the horizon?

Formed in 1993, Aventura made huge waves in the American music scene with their marrying of the bachata of the Dominican Republic to the pop and hip-hop flavors of The Bronx. Four out of their five studio albums broke the top five of the Billboard Tropical chart, and they memorably sold-out Madison Square Garden in 2007. Expect to hear everything from 'La Boda' to 'Su Veneno' at this huge reunion.

Seen Aventura? Loved it? Hated it?

Sound good to you? Share this page on social media and let your friends know about Aventura at Scotiabank Arena.