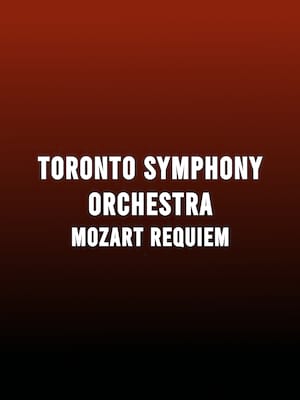 One of the most talked-about pieces of classical music in history.

The dawning of the new decade is heralded by the Toronto Symphony Orchestra as they perform Mozart's masterful final work, the Requiem Mass in D Minor (K. 626), in January 2020. The hauntingly beautiful piece was left unfinished at the time of his death in 1791 but completed the following year by Franz Xaver Sussmyer. A moving work of emotive counterpoint, the Toronto Mendelssohn Choir will join the TSO to deliver a stirring rendition of this masterpiece.

Much legend exists around the Requiem, one notable story being that it was commissioned by an unknown messenger, leading Mozart to believe he was composing it for his own funeral. The concert will also feature a performance of Mozart's Symphony no. 39. The conductor is two time Grammy nominated Sir Andrew Davis, who is currently serving as TSO's interim artistic director.

Sound good to you? Share this page on social media and let your friends know about Toronto Symphony Orchestra - Mozart Requiem at Roy Thomson Hall.