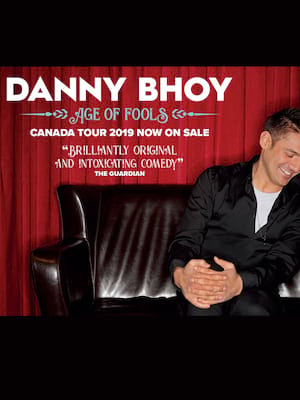 His routines have the mark of those which are quote from, for years to come.

Scottish comic Danny Bhoy returns to Canada this winter with his brand new tour, Age of Fools. Using his trade-mark narrative wit, this new tour sees Danny take a scathing look at some of the worlds biggest news stories.

First selling out his debut Edinburgh Fringe show for three weeks straight in 2001, Danny has gone onto conquer the North American and Australian market with successful stints at the Melbourne and Sydney comedy festivals. Half-Indian and Scottish, much of his humor is based on growing up as a child of two cultures, as well as his outrageous use of segues.

Bhoy's appeal comes from his relaxed approach to comedy, by telling stories Danny draws the audience in without sucker-punching them at the end with an over-the-top punchline. That's not to say he can't do angry - for instance, his 2013 show was focused on the ineptitude of large corporations, and his struggles trying to get good customer service!

In an age of fools, it was a very refreshing encounter. Bravo. And ...... more

Nathalie: “Best of them all”

Sound good to you? Share this page on social media and let your friends know about Danny Bhoy at Roy Thomson Hall.