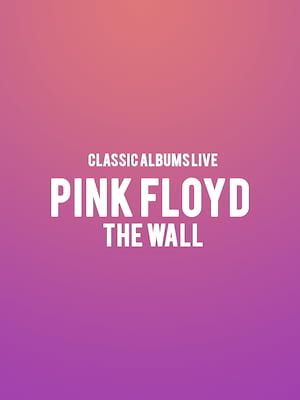 The Wall is the most startling rhetorical achievement in the group's singular, thirteen-year career.

Based in Toronto, Classic Albums Live is a concert series aimed at keeping the spirit of rock and roll alive with glorious live recreations of seminal albums from the classic rock era. Shying away from cheap gimmicks and cheesy impersonations, the production keeps things firmly focused on the music, recreating entire records with the world's best musicians and an attention to detail to faithfully conjure every sound on the original album. Experience Pink Floyd's progressive rock masterpiece The Wall live!

Released on November 30th 1979, The Wall was a tour de force rock opera that explored the fictional trials and tribulations of Pink, a jaded rock star who exiles himself from society as symbolized by a wall. Whilst initially met by mixed reviews, Pink Floyd's eleventh studio album later came to be widely acknowledged as one of the greatest albums of all time. Don't miss soaring, note-for-note recreations of iconic tracks like Another Brick In The Wall, Comfortably Numb and Run Like Hell.

Sound good to you? Share this page on social media and let your friends know about Classic Albums Live: Pink Floyd - The Wall at Roy Thomson Hall.