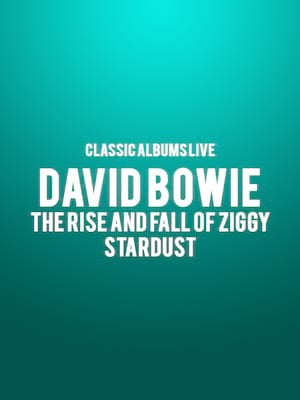 David Bowie has pulled off his complex task with consummate style, with some great rock & roll, with all the wit and passion required to give it sufficient dimension and with a deep sense of humanity that regularly emerges from behind the Star facade.

Based in Toronto, Classic Albums Live is a concert series aimed at keeping the spirit of rock and roll alive with glorious live recreations of seminal albums from the classic rock era. Shying away from cheap gimmicks and cheesy impersonations, the production keeps things firmly focused on the music, recreating entire records with the world's best musicians and an attention to detail to faithfully conjure every sound on the original album. Experience David Bowie's iconic rock opera The Rise and Fall of Ziggy Stardust and the Spiders From Mars live!

Hot on the heels of his breakthrough masterpiece Hunky Dory, glam rock icon David Bowie's fifth studio album proved to be a major landmark upon its release in 1972.  The Rise and Fall of Ziggy Stardust was recorded in less than three weeks, with the majority of its performances being first takes. Tracks like Star Man, Suffragette City and Rock 'N' Roll Suicide trace the fictional misadventures of Bowie's titular alter ego, a promiscuous rock god who is ultimately destroyed by his own excesses.

Sound good to you? Share this page on social media and let your friends know about Classic Albums Live: David Bowie - The Rise And Fall Of Ziggy Stardust at Roy Thomson Hall.