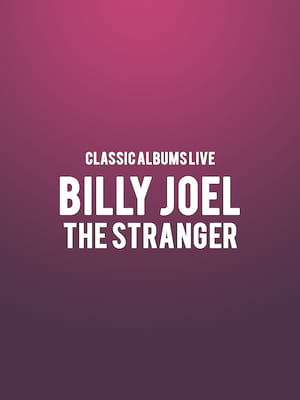 Based in Toronto, Classic Albums Live is a concert series aimed at keeping the spirit of rock and roll alive with glorious live recreations of seminal albums from the classic rock era. Shying away from cheap gimmicks and cheesy impersonations, the production keeps things firmly focused on the music, recreating entire records with the world's best musicians and an attention to detail to faithfully conjure every sound on the original album. Experience Billy Joel's breakthrough album The Stranger live!

Although it was his fifth studio album, The Stranger proved a mainstream triumph for Joel, who was still a struggling singer-songwriter before it came out on September 29th, 1977. The release proved so popular, it not only propelled him towards the Top 10 on singles and albums charts, but shone a light on his definitive single Piano Man, which was released four years prior. Don't miss note-for-note recreations of iconic tunes like Just The Way You Are, Movin' Out and She's Always A Woman.

Sound good to you? Share this page on social media and let your friends know about Classic Albums Live: Billy Joel - The Stranger at Roy Thomson Hall.