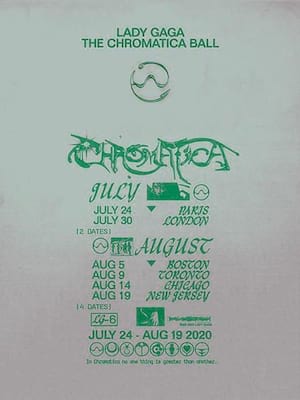 Mother Monster sets out on the Chromatica Ball Tour!

After wowing at the Superbowl, killing it at the movies and generally becoming one of pop's biggest superstars, Lady Gaga is back! Heading out on strictly limited tour in support of her sixth studio album Chromatica, don't miss Mother Monster as she brings what is likely to be the show of the year to you!

One of modern music's most iconic figures, Lady Gaga is a true force of nature. Since the release of her 2008 single 'Let's Dance' she's carved out her own path through the modern pop landscape, bowing to no one's opinions but her own. Hugely successful and critically acclaimed, she has five Grammys to her name and total record sales of over 146 million worldwide. Tracks like 'Poker Face', 'Bad Romance' and 'Born this Way' have all achieved radio ubiquity and demonstrated her ineffable ability to summon up world-conquering, synth-driven earworms.If lead single 'Stupid Love' is anything to go by, it looks like the Chromatica era represents a return to her pop roots - we can't wait!

I was there last night with my wife, son and his girlfriend. We loved it.... more

Lady Gaga's concert at AAC was nothing short of remarkable. Her talent... more

Sound good to you? Share this page on social media and let your friends know about Lady Gaga at Rogers Centre.