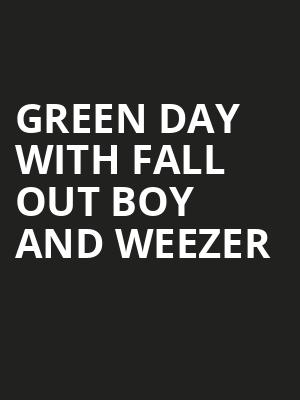 Green Day with Fall Out Boy and Weezer

You really don't want to miss this...

Why See Green Day with Fall Out Boy and Weezer?

The three titans of Pop Punk are joining forces for a mammoth tour in 2021! The Hella Mega Tour sees Green Day, Fall Out Boy AND Weezer embark on an exclusive set of dates next July, and play through to the end of August. As well as getting to hear all your favorite Pop-Punk hits, and getting to relive your teenage years, you'll also get to hear new music from each act!

With a whopping 32 albums between them Green Day, Weezer and Fall Out Boy are the undisputed royal family of Pop-Punk. Beloved by angsty teenagers, who grew up to be angsty adults, in the early '90s these three super-groups are purveyors of some of the most memorable tunes in the world. Whether it's "American Idiot", "Thnks fr th Mmrs" or "Say It Ain't So" you are sure to be headbanging all night long.

2020 also sees Green Day and Weezer release brand new albums! Green Day's "Father of All..." will be the trios 13th album and is set to be released on February 7. Weezer will release their 14th album, titled "Van Weezer" in May 2020.

Seen Green Day with Fall Out Boy and Weezer? Loved it? Hated it?

Sound good to you? Share this page on social media and let your friends know about Green Day with Fall Out Boy and Weezer at Rogers Centre.