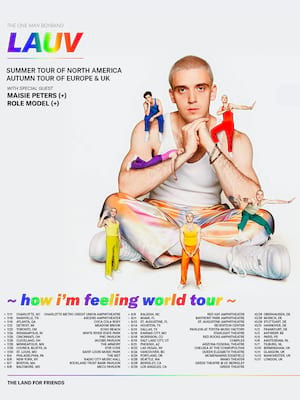 Bedroom-producer-turned-generation-Z-superstar Ari Staprans Leff, AKA Lauv, graduated from the Music Technology Program at NYU and released his debut single in 2014, causing a quiet, certified-gold storm with its 250 million streams to date. Fusing together electronic, airy beats with jazz-tinged guitars and soulful vocals, the promising young performer solidified his status as one to watch with a host of dance-floor ready singles and a billion more Spotify streams!

Now he's back with a brand new album! To be released track by track alongside a hotly-anticipated North American tour, How I'm Feeling mines a depth of modern motions, exploring love, loneliness and heartbreak in the internet age.

Seen Lauv? Loved it? Hated it?

Sound good to you? Share this page on social media and let your friends know about Lauv at RBC Echo Beach.