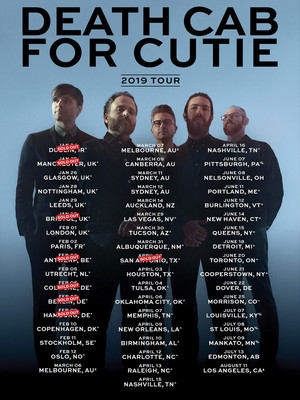 Why See Death Cab For Cutie with Jenny Lewis?

Fresh from celebrating the 15th anniversary of their career-defining classic album Transatlanticism, alternative indie rock heroes Death Cab For Cutie are fixing to hit the road once more, this time in support of their latest album Thank You For Today, released in the summer of 2018. Tagging along for the hotly anticipated jaunt, fellow indie icon Jenny Lewis joins the DCFC frontman and former Postal Service bandmate Ben Gibbard for the first time in 13 years, as well as Mitski, Car Seat Headrest, My Brightest Diamond and The Beths on various dates.

Formed in their home city of Seattle in 1997, DCFC quickly rose to national and subsequent international attention thanks to their soul searching songwriting, tender melodies and nuanced lyrics, all wrapped up in a highly emotive style of playing. One of the definitive outfits of the American indie rock scene of the 2000s, their legacy includes beloved songs Soul Meets Body, I Will Possess Your Heart and folk-tinged tearjearker I Will Follow You Into The Dark

Seen Death Cab For Cutie with Jenny Lewis? Loved it? Hated it?

Sound good to you? Share this page on social media and let your friends know about Death Cab For Cutie with Jenny Lewis at RBC Echo Beach.