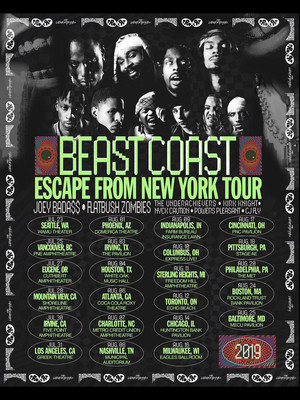 The Flatbush Zombies, Pro Era and the Underachievers join forces as Beast Coast

In 2013, Joey Badass (rapper, MC and leader of Brooklyn-based hip hop collective Pro Era) hit the road with his crew, fellow East Coast rap revivalists Flatbush Zombies and psychedelic hip hop duo the Underachievers on the Beast Coastal Tour. Now, six years later, they've shared their first ever collaborative track as the supergroup Beast Coast and are hitting the road once more on a coast to coast Summer Tour.

Unveiled in March 2019, 'Left Hand' is a bristling, high energy posse cut featuring the talents of Mr Badass himself, Meechy Darko, Erick Arc Elliott, Nyck Caution, Issa Gold. CJ Fly, Zombie Juice, AK and Kirk Knight. Primal, heavy-hitting drums fuse with a dark, ominous synth line before giving way to an epic, anthemic chorus that is sure to whip their oncoming audiences into a frenzy. A sign of things to come, 'Left Hand' points towards a debut album, which is rumoured to hit the radio waves before the band head out on tour.

Sound good to you? Share this page on social media and let your friends know about Beast Coast - Joey Badass with Flatbush Zombies at RBC Echo Beach.