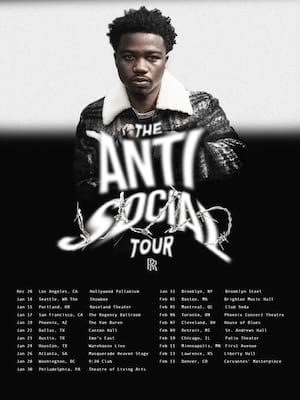 Part of Roddy's charm, when he's not singing about the devastating effects of death, drug dealing, and economic desperation, is his commitment to rapping about the intricacies of obscene affluence.

21-year-old California born rapper Roddy Ricch made massive waves in rap with the debut of his first mixtape 'Feed Tha Streets' in late 2017. This was followed up by 'Feed Tha Streets II' released in November 2018 which hit number 67 on the Billboard 200 chart. The rapper's upcoming nationwide tour comes at the same time as his latest album 'Please Excuse Me for Being Antisocial' scheduled for release on 6th December 2019.

In his short career, Roddy Ricch is quickly making a name for himself. In May 2018, he was brought on stage by late rapper Nipsey Hussle at his PowerHouse concert in L.A. This will be his first-ever headline tour.

Sound good to you? Share this page on social media and let your friends know about Roddy Ricch at Phoenix Concert Theatre.