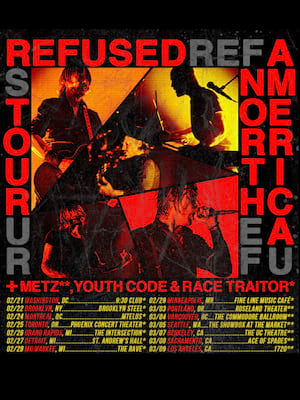 With War Music, Refused have delivered a rousing call to arms, and perhaps a call to their punk-rock peers to join the fight.

Originating from Umea, Swedish hardcore punk band Refused formed in 1991. Enjoying a long and lasting legacy thanks to their unique blend of hardcore, punk and metal, the outfit broke many a rocker's heart when they split up following the release of the seminal album The Shape of Punk To Come in 1998. Luckily the punk gods intervened and the outfit announced their long-awaited reunion in 2012, a miracle considering the band's original and explicit declaration to never reunite!

The sextet now hits the road in support of their 2019 record War Music, and they'll be bringing along Los Angeles' industrial duo Youth Code and Canadian noise punks METZ as support on select dates. Recapturing the spirit of The Shape of Punk to Come, War Music finds the band on fine form. A no-holds-barred, politically-driven sonic punch to the face, the album's messages of anti-capitalism mingle with monstrous riffs, rhythms, and vocal growls, forming the perfect protest music antidote to today's tumultuous times.

Seen Refused? Loved it? Hated it?

Sound good to you? Share this page on social media and let your friends know about Refused at Phoenix Concert Theatre.