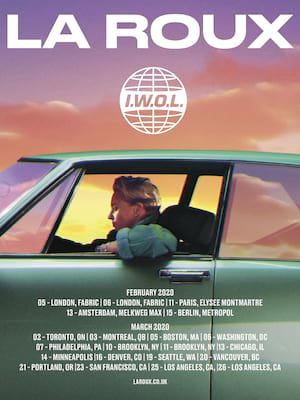 She's the real deal: a smart and canny songwriter with a devastating ear for hooks, who boasts a mean falsetto and sings like she truly means it.

Known for hit singles 'In for the Kill' and 'Bulletproof,' electronic pop act La Roux started as a duo in 2006 consisting of vocalist Elly Jackson and record producer Ben Langmaid. They received the 2011 Grammy Award for Best Electronic/Dance Album for their self-titled debut released in 2009 and the now solo Elly Jackson prepares for a much anticipated North American tour.

After five years of no music, La Roux released new song 'International Woman of Leisure' at the end of October 2019, which was described as "a punchy pop track that finds La Roux showing off her agile falsetto on the verses before slipping into a cool croon on the kiss-off chorus" by Rolling Stone. This comes four months before the release of third studio album 'Supervision' in February 2020.

Sound good to you? Share this page on social media and let your friends know about La Roux at Phoenix Concert Theatre.