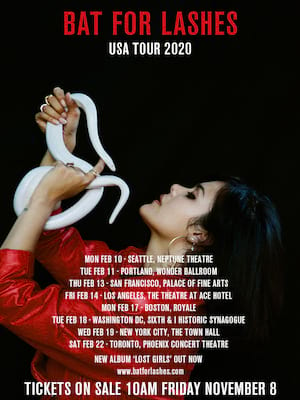 Khan seems entirely at home on stage and her musicianship is fantastic.

Why See Bat For Lashes?

British art-pop musician Bat For Lashes heads out on tour across the USA and Canada in February 2020 in support of her new album Lost Girls. The singer, composer, multi-instrumentalist and visual artist begins the 8-date run in Seattle on 8th February, with the final currently scheduled show in Toronto on the 22nd.

Gaining acclaim and a cult following for her blend of swooping synths, soaring harmonies, spoken word and evocative lyrics, Bat For Lashes (real name Natasha Khan) has been nominated 3 times for the UK's prestigious Mercury Prize. Her latest record Lost Girls marks her first independently released album since leaving her 10-year major-label deal and the freedom afforded to her by a self-release is evident. Announced in June 2019 and coming out two months later, the album nods beautifully to 80s synth-pop, whilst still keeping with the haunting, ethereal aesthetic fans have come to love.

Sound good to you? Share this page on social media and let your friends know about Bat For Lashes at Phoenix Concert Theatre.