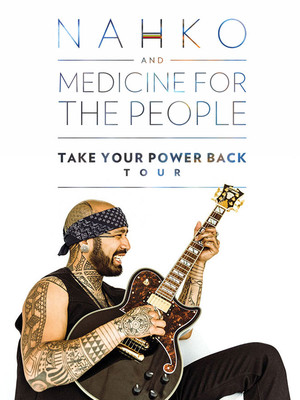 Nahko Bear led his talented band through a set full of love energy and good vibes.

The Take Back Your Power Tour

Ever since the debut of his first single Early February, Nahko Bear has been building bridges and sharing messages of hope and optimism with and in his music. The inspirational performer and his band Medicine For The People create a percussion-rich blend of styles, including hip hop, indie rock, and spoken word, under their own unique genre they've labeled 'thump-hop'. Don't miss them when they travel their homeland on the Take Back Your Power North American Tour!

A sixth-generation Apache/Mohawk, as well as of Puerto Rican and Filipino descent, Bear grew up in the suburbs with a white adopted family, turning to music at a young age to help with identity problems. A natural and gifted storyteller, his roaring voice weaves together poetry, passion, pain and an environmental warrior's fearless spirit - this latest tour revels in the wonder of the natural world, aiming to uplift and empower with the addition of support acts and independent women Ayla Nereo and Nattali Rize.

Sound good to you? Share this page on social media and let your friends know about Nahko at Opera House.