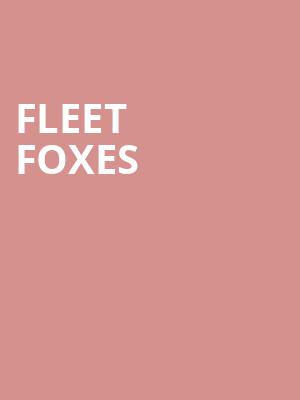 Golden harmonies and baroque folk from the acclaimed indie band

Fleet Foxes bring their shimmering harmonies to stages across the US this summer on the newly announced Shore Tour, in support of their 2020 record of the same name. First coming to mainstream attention during the indie heyday of the late '00s, they used Myspace to share their haunting melodies. Their first full-length album, the eponymous Fleet Foxes, was released in 2008 and included the evocative calling card, 'White Winter Hymnal'.

Led by singer Robin Pecknold, Fleet Foxes are the most acclaimed band of the 00s indie folk explosion. Whereas their counterparts aim for radio-ready, banjo-assisted choruses, the Foxes conjure lush, intricate tracks, that overflow with baroque imagery and mystical references.

From the first note to the last standing ovation movement. Fleet Foxes... more

With such a talented band the Benedum was the place to take in all their... more

Sound good to you? Share this page on social media and let your friends know about Fleet Foxes at Massey Hall.