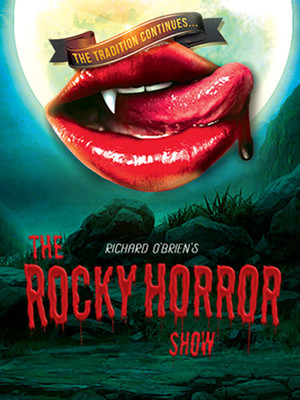 There's a light, over at the Frankenstein place.

Why See The Rocky Horror Show?

Let's do the Time Warp Again

Gird your loins Toronto! Richard O'Brien's iconic B-movie send-up returns to The Lot once more for this Halloween tradition. Sold out for the last seven years in a row, this highly antici....pated annual engagement is your chance to don your fishnets, grab your newspapers and discover a world of absolute pleasure alongside clean-cut kids Brad and Janet who find themselves at the mercy of one of Musical Theatre's most seductive aliens. Enter at your own risk!

First shown on London's West End in 1973 The Rocky Horror Show quickly captured imaginations around the world. A delightfully batty pastiche of 40's and 50's Sci-fi and horror B-Movies, it follows a naive all-American couple who find themselves stranded at a particularly strange celebration held by the enigmatic Dr. Frank-N-Furter and his strange assistants. Quickly entangled in their debaucherous world, Rocky Horror is an eminently quotable paean to freaks and misfits, sexual freedom and dancing, set to an unforgettable soundtrack.

Saw this production last night and while I enjoyed the theatre being small... more

Sound good to you? Share this page on social media and let your friends know about The Rocky Horror Show at Lower Ossington Theatre - Mainstage.