Sorry! You missed Broadway and The Bard at Greenwin Theatre at the Toronto Centre for the Arts 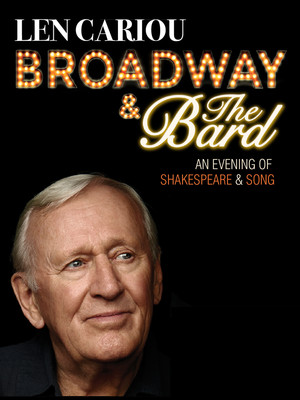 Broadway and The Bard

Why See Broadway and The Bard?

Shakespeare meets the dazzling spectacle of American musical comedy in this inventive new production from Len Cariou, Barry Kleinbort, and Mark Janas - a trio of the Great White Way's most beloved writers.

Expect an evening of classical sonnets and unexpected musical pairings as distinguished performer Cariou takes you on a ninety-minute odyssey through superb soliloquy and memorable song in what the Bard might refer to as "a most rare vision."

Len Cariou, Legendary Canadian performer of stage and screen currently starring on the hit CBS television show "Blue Bloods" combines his two life long loves, Shakespeare and musical comedy for an evening of fun and surprises in Broadway & the Bard.

Len Cariou's career spans more than fifty years and he distinguished member of the Theatre Hall of Fame and a three-time Tony nominee, for Applause, A Little Night Music, and for his legendary performance as Sweeney Todd: The Demon Barber of Fleet Street, (Tony Award-winner, Best Actor). In 2018 he was honored to be named as an Officer of the Order of Canada for his achievements as an actor of stage and screen

Sound good to you? Share this page on social media and let your friends know about Broadway and The Bard at Greenwin Theatre at the Toronto Centre for the Arts.