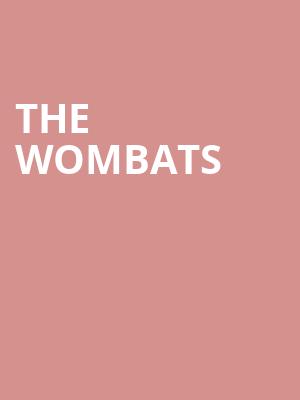 The Wombats return with their latest album 'Fix Yourself, Not The World'

Why See The Wombats?

Fix yourself, not the world tour!

Purveyors of kinetic and confessional indie rock with a dance-pop sheen, The Wombats are back in the US to tour their latest album, 'Fix Yourself, Not The World'. This new studio album is full to the brim of forward thinking music which they've been working on over the past year from their homes. With 15 years and multiple chart hitting albums, The Wombats are pulling in larger audiences than ever before. Don't miss out!

First formed in 2003, their first album, 2006's 'Girls, Boys and Marsupials,' was a collection of witty, catchy anthems that landed on the UK charts with a bang, as lead singer Matthew Murphy's hilariously honest tales of coming of age hit a nerve, with 'Let's Dance to Joy Division', 'Kill The Director' and 'Moving to New York' becoming instant classics. Their sophomore effort, 'This Modern Glitch' followed up with a sleeker, but no means unbridled sound, which their third album 'Glitterbug' inhabited perfectly. Turning up the synths to 11 and the donning their best dancing shows, Fix Yourself, Not The World is set to cement The Wombats at the top of Indie genre.

Seen The Wombats? Loved it? Hated it?

Sound good to you? Share this page on social media and let your friends know about The Wombats at Danforth Music Hall.