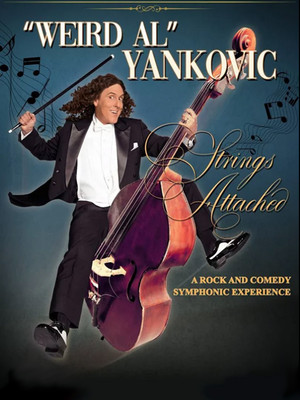 I wanted to follow up my most barebones tour ever with my most elaborate and extravagant tour ever. We're pulling out all the stops for this one.

The undisputed king of the comedy song follows up his low key 2018 outing 'The Ridiculously Self-Indulgent, Ill-Advised Vanity Tour, with his biggest and most spectacular show to to date. The Strings Attached tour will see Weird Al Yankovic changing up his game once more, donning a tux, and presenting an evening of rock and comedy, backed by a live symphony orchestra and backing singers. And - for fans who weren't so sure about the last tour will be happy to know that he's done with deep cuts and is back to the hits, classics and more!

As a leader of pop culture parody, Weird Al has sold more comedy recordings than any other artist in history. In a career spanning nearly three decades, he has amassed 30 Gold and Platinum albums, 7 Gold and Platinum-certified home videos and 3 Grammy Awards.

The show was awesome! For 2 hours, and and his long time band members... more

Weird Al busted it out again, another amazing show. His energy was top... more

Sound good to you? Share this page on social media and let your friends know about Weird Al Yankovic at Budweiser Stage.