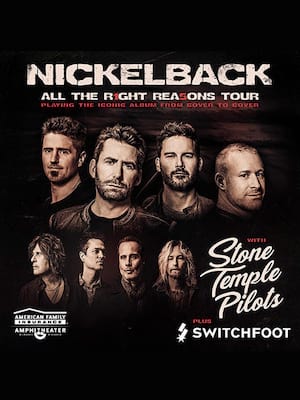 Nickelback head out on All The Right Reasons Anniversary Tour!

all the right reasons 15th-anniversary tour

Canada's biggest rock band are hitting the road on an extra special tour this year! The four-piece, who are behind hits like "How You Remind Me" and "Rockstar", are celebrating the 15th anniversary of their number one and multi-platinum album "All The Right Reasons". So put on your dancing shoes and start warming up those vocal cords for a night that you'll never forget!

Led by Chad Kroeger, Nickelback first came to the world's attention with the single "How You Remind Me", which would go onto become the most played song of the 2000s on American radio stations. Their brand of catchy post-grunge rock helped establish the band's as genre behemoths, following up the massive success of "How You Remind Me" with the equally ubiquitous singles "Photograph" and "Rockstar".

They didnt disappoint. They were great from start to finish. Took my... more

Despite the incredible heat, this show was amazing! Took my 13 yr old... more

Sound good to you? Share this page on social media and let your friends know about Nickelback at Budweiser Stage.