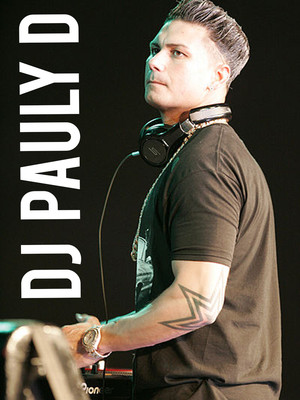 From MTV to the Decks, DJ Pauly D live!

from MTV to the world!

First finding fame on MTV's Jersey Shore, Paul DelVecchio a.k.a DJ Pauly D has carved his own niche in the music scene. With flocks of fans from his reality TV days, Pauly D can boast of some pretty impressive credits, including touring with Britney Spears and signing to 50 Cent's G-Unit and G-Note records. A big hit with TV fans for his fun and loveable manner, DJ Pauly D is hitting the road to bring some exclusive gigs to fans across North America!

When Jersey Shore producers first approached Paul DelVecchio on MySpace in 2009 no one could have predicted the unprecedented success that would soon follow. As one of the show's most loved characters DJ Pauly D has since featured on other programs like Famously Single, Marriage Bootcamp and Double Shot at Love alongside fellow Jersey Shore cast member Vinny. Pauly D released his debut single "Night of my Life" in 2012 with "Back To Love" quickly following in 2013.

A firm favorite on the DJ and club circuit, don't miss your chance to see DJ Pauly D Live!

Sound good to you? Share this page on social media and let your friends know about DJ Pauly D at Rebel.